The premise of RAID ENCOUNTERS is simple; keep your raid party alive and use their Avatars to destroy bad guys before they wipe you. Sometimes, however, it's definitely easier said than done.... 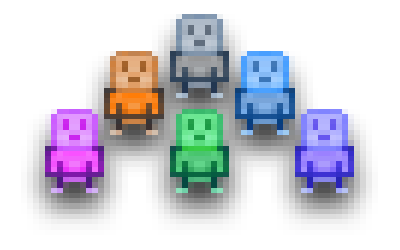 Your Raid Party consists of six different participants, and each one controls their own ball of energy called an Avatar. Your job is to move them around the dungeon and keep them out of danger while controlling their Avatars as they bounce from enemy to enemy, and wall to wall. When you earn experience (XP), spend skill points, and get bonuses in-game, these affect the entire party as a whole. They level up together and share the same HP pool.

As you progress through RAID ENCOUNTERS, you will find that each party member and Avatar has unique properties that will either greatly assist your run, or hamper you greatly. Becoming acqauinted with all of their abilities and power versus the enemies or encounter you're facing will go a long way in helping you increase your DPS ratings and propel you up the Leaderboards.

For more information on how to control your Raid Party, make sure you check out the appropriate controls page ( PC Controls or Mobile Controls).

The Acid Avatar is a great, all-purpose weapon that can be used in nearly any situation. Even though different Monsters and Raid Bosses have varying levels of armor and defense against Acid damage, this Avatar is unique in the fact that each time it hits an enemy it drops their base armor level down a few points, making all of your Avatars hit a little harder. If you run into a Monster or Raid Boss with a lot of armor or HP, you can slowly dissolve it away by hitting them a few times with acid.

The Fire Avatar is a weapon purely dedicated to damage. Its initial hits aren't as strong as other Avatars, but it makes up for that with a devastating Damage-Over-Time (DoT) effect that burns targets for 10 seconds after they're initially hit. If you have extra time to spare and need to focus your DPS onto other enemies, this is a great way to do it.

The Ice Avatar is designed to make your life easier, not only by hurting enemies with ice damage, but also slowing them down dramatically when your Avatar connects with them. If you're dealing with enemies who chase your Raid Party around, this is a great way to slow them down so you can snipe them from afar or handle a Raid Boss easier.

The Life Avatar deals a little bit of damage to most enemies, with an emphasis on Undead targets. The special feature of this avatar is its ability to heal your Raid Party for a portion of the damage it deals to Monsters or Raid Bosses it hits. If you can't wait for a Health Boost Power-up to appear, using the Life Avatar is a good way to stay alive.

The Lightning Avatar is a weapon that does well in large mobs of Monsters as it hits multiple targets slightly faster than other Avatars. Its unique ability is to shock adjacent Monsters when it hits a Monster within proximity of others, dealing damage to multiple targets simultaneously.

The Plague Avatar is a lethal weapon, used to deal great harm to huge swarms of mobs. Its initial hits are relatively weak, but they make up for the fact with the disease they spread. When you hit a Monster with this Avatar, it will become infected with a lethal disease which acts as a DoT effect for a brief amount of time. Right before the DoT effect expires, the Monster will become contagious and any other Monster it's making contact with will contract the DoT for the same amount of time. Just like the initial carrion of the disease, it too will become contagious before the DoT expires.