The Lair of Coronus is the resting chamber of the evil pixel entity. Multi-colored priests of the world float around the Lair trying to delay your Raid Party as much as they can before their lord reveals himself. 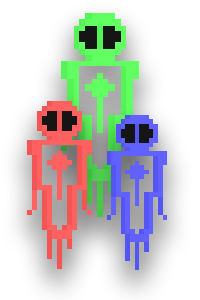 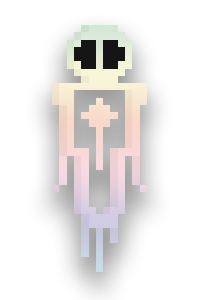 Pixel Spawns are floating bundles of colorful energy, slowly gliding back and forth throughout the Lair. They appear to be relatively harmless until your Raid Party gets too close to them, at which point they will zap you. By themselves they don't pose too much of a threat, but get enough of them together and they can mob your Raid Party pretty quickly. They will frequently teleport to escape danger or sneak up on you.

Pixel Keepers are the Elite Monsters in the Lair of Coronus. Their attacks and movement behavior is identical to those of the Pixel Spawns, but they zap harder and they have more health. They're also very larger and are the last type of Monster between your Raid Party and Coronus.

They appear to be somewhat benevolent, but these quiet children of Coronus are lethal. Do not let their colorful and light-infused coats fool you, as they are not friendly. They have exceptional Base Armor and great protection against all of your Avatars, so your best bet is to use a combination of Avatars to weaken their armor and then attack. There is no wrong way to attack the swarms of Pixel Monsters you'll be facing, so use your imagination... you'll need it. 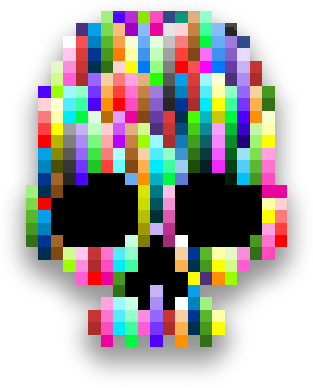 Coronus wastes no time making work of any intruders of his Lair, and while he doesn't cause harm himself, he does have his own powerful Life Avatar which he uses not only to hurt your Raid Party, but it also absorbs Health from his Pixel Spawns and Keepers which helps keep him healed. You'll have to give Coronus everything you got to down him and even sacrifice your own Raid Party's health to keep his Life Avatar from draining his own bodyguards of their life force.

Coronus will sometimes drop a Scintillating Life Gem which greatly increases the healing ability of your Life Avatar. This is an extremely rare drop, but you can increase your chances of it dropping by raising your Luck skill.