The User Interface of RAID ENCOUNTERS is designed to provide players with an always on Heads Up Display, or HUD, that reflects XP, health, meters, timers, and a sidebar for quickly switching between Avatars. There are also several graphical and textual indicators that appear during the action. 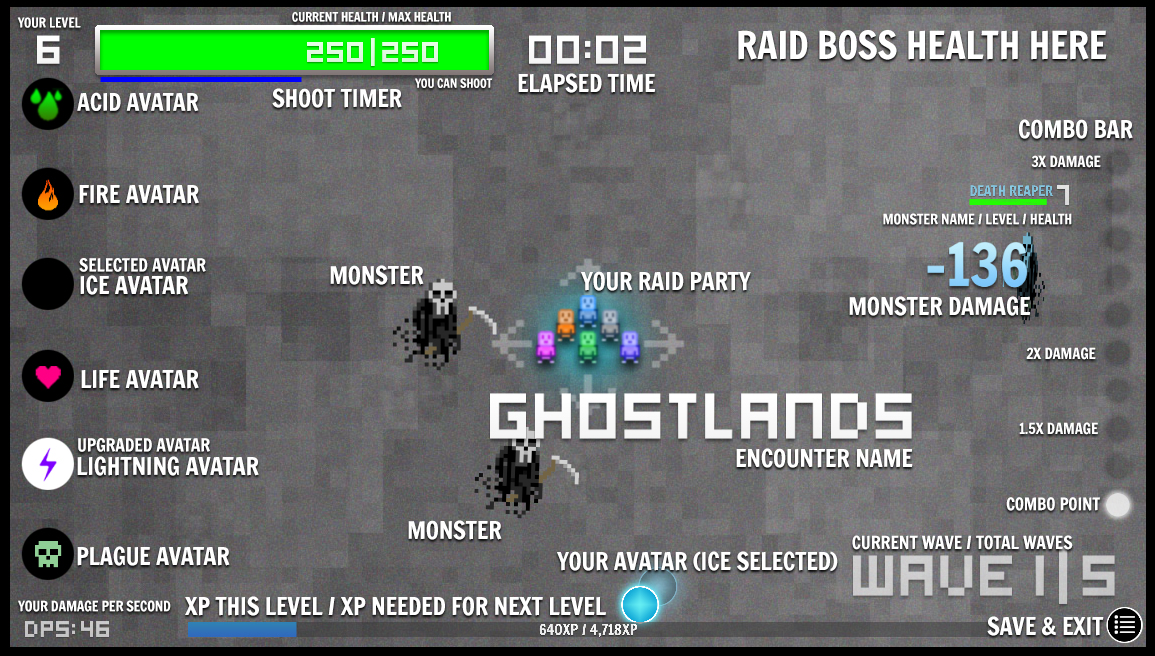 The User Interface consists of several elements which provide players with convenient information and visual cues while fighting inside an Encounter or Dungeon. When users first select an Encounter to play, they will be greeted with two temporary, textual elements: the Encounter's title which is slightly off-center on the screen, and the current wave and number of waves in the bottom right corner. Whenever all of the Monsters are defeated in a given wave, the Wave Indicator will fade in and out signifying a New Wave beginning. The Raid Boss will appear after all of the enemies have spawned in from the Final Wave. In the above screenshot, this means that the Raid Boss would appear at Wave 5.

There are several bars, timers, and meters while playing Raid Encounters, and they will slightly vary based on the mode in which you're playing in. In the above screenshot, this reflects the typical layout of playing in regular Encounters. The Raid Party health bar, located at the top left corner of your display, reflects the current health and maximum health pool of the Raid Party. As it decreases, it will slowly fade from green, to yellow, to red as you reach dangerously low levels. At around 20%, a text pop-up will appear to let you know that your health is getting extremely low and a bouncing arrow will suggest you pull out your Life Avatar. When your Raid Party is hit, your Avatar and Raid Party will turn red as well, and your entire screen will also briefly flash red.

If you'd like to exit the current Encounter, there is a small button on the bottom right of your screen that will save your progress and take you to the Main Menu. You will NOT be able to start the Encounter on the same Wave you left from, but your acquired XP and Loot will be saved.

While not pictured in the screenshot, when a Raid Boss spawns he will have his own large health bar in the top right corner of your display. This health bar does not fade into different colors and remains a crimson red color. When the Raid Boss is defeated the bar will fall off of your screen.

There are several textual cues which appear while in combat. When your Avatar damages a Monster, you will see a color number pop up from their body. This reflects the amount of damage you inflicted upon them and the type of damage. In the above screenshot, a light blue color reflects Ice Damage done. When your Raid Party takes damage, you will have larger numbers pop-up near your Party and fall down towards the bottom of the screen.

When your Avatar or Raid Party touches a Monster or Elite Monster, you will see some information appear over their heads. This reflects the name of the Monster, their level, and their current health. If their name is colored, this signifies an effect on them. In the above screenshot, a light blue tint over their name lets you know they are frozen. Their body is also this color. The level lets you know how powerful they are. A higher level of monster means they have more health and hit harder.

Each time you hit a Monster or Elite Monster with your Avatar you will build up Combo Points which are reflected by the circles on the right side of your screen. There will also be textual cues over the heads of the Monsters you hit when you reach 3, 5, and 10 and they will also alert you to new Damage tiers of 2X and 3X Damage when you successfuly get your Combo Points to 5 and 10, respectively. While the Combo Damage bonus will carry over to damaging Raid Bosses, they will not build up your Combo points after any hit but they will keep your built up Combo Points alive.

There is a sidebar to the left of your screen which lists all of your Avatars, totaling 6. Depending on the Encounter, you will be cycling through these a lot to find the best damage or ability to get the best results versus certain Monsters. By default, the icons for each of the Avatars are surrounded by a black circle. When you find an Avatar Upgrade Gem, such as a Scintillating Fire Gem, the circle will turn white to represent the upgraded ability of that particular avatar. You can cycle through Avatars on PC by rolling your Mousewheel or pressing numbers 1-6 on your keyboard, or by clicking or tapping them on PC or Mobile.

When an Avatar is selected, its icon will disappear from the sidebar.

All Modes in Raid Encounters will reflect an Elapsed Timer as well as a DPS Meter. Both of these are integral to Leaderboards and High Scores, so it's important they remain accessible at all times during gameplay. The DPS Meter is updated anytime damage is inflicted on an enemy. The Elapsed Timer ticks up every second, but will measure milliseconds for purposes of High Scores and Leaderboards. When playing SURVIVAL! Mode, there will be two additional timers in the top right corner of your screen which reflect your current best time for staying alive, and a much larger countdown timer. Killing Monsters will add time to the larger counter, but when it counts down to 0:00 the game will end.

When you find Loot, there will be a pop-up window that appears towards the bottom, center area of your screen. When this appears, your Raid Party has already looted the item and all you need to do is tap on it to dismiss it.

Power-ups appear randomly across the Encounter, bobbing up and down. Pick these up by moving your Raid Party across them.